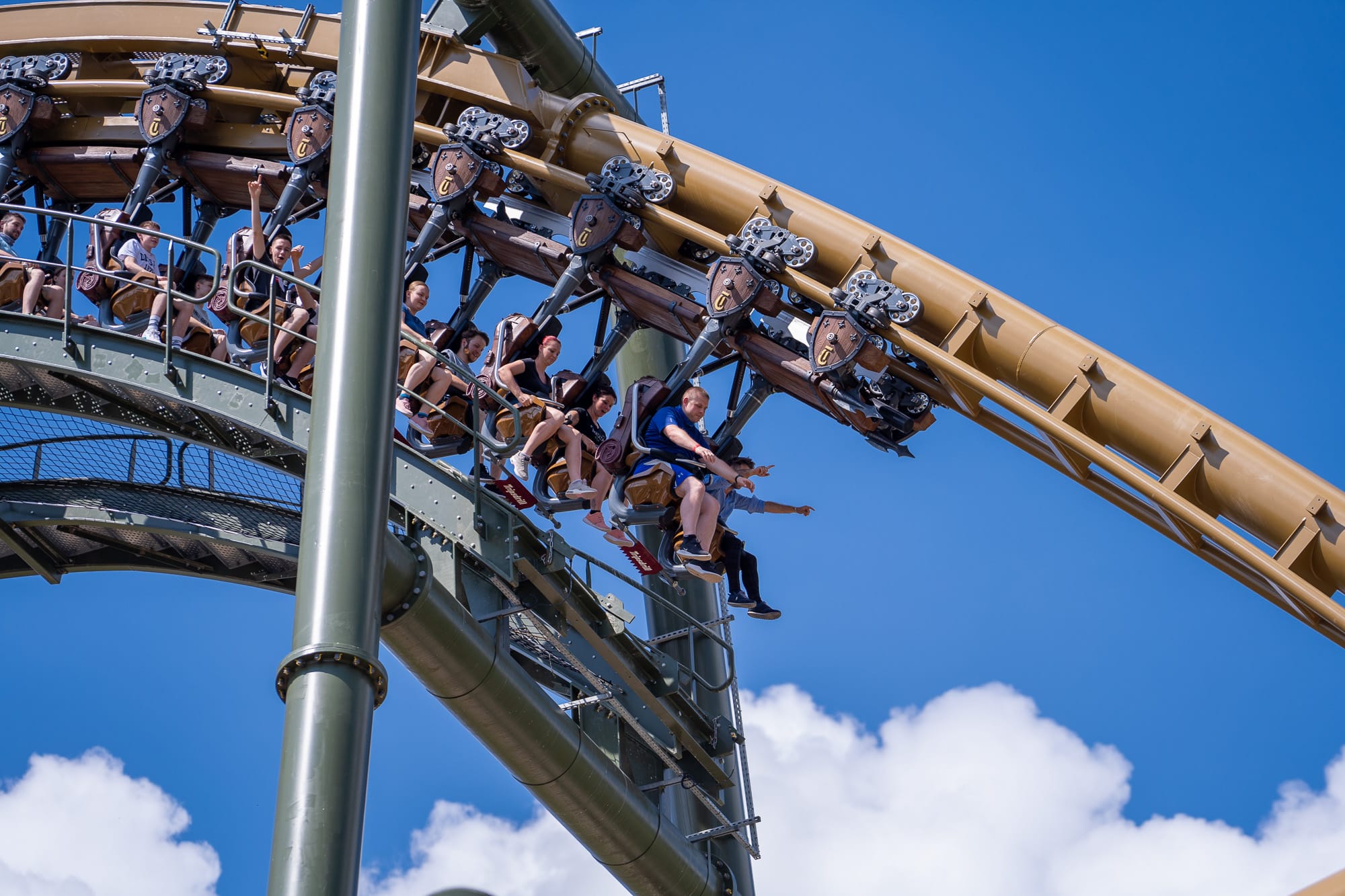 Tripsdrill is getting two world’s firsts!

Vekoma and Tripsdrill teamed up to build an attraction which is unique in its configuration. Not only is Tripsdrill getting the first Vekoma Suspended Thrill Coaster ever built. They’re also getting the first combination of a suspended roller coaster and shuttle coaster which tracks are intertwined.

Please note: While the attraction itself is built and operational the theming of the rides and the area they’re located in will be completed for the 2021 season.

Volldampf is a Vekoma Family Boomerang.

The German word “Volldampf” can be translated as “Full Steam (Ahead)” or “Full throttle”. Volldampf’s theme is inspired by the “schwäbische Eisenbahn” in english “Swabian Railroad” which is a story based on a Swabian folk song called ”Auf Der Schwäb’sche Eisenbahne” (on the Swabian Railroad). In the songs plot a peasant is attaching his goat onto the railroad train to “walk alongside the track” as he would usually do with his horse wagon. Unfortunately the railroad is much faster that the horse which the goat is used to. At the final destination only the charred remains of his goat are still attached to the trains’ coach. – Pretty dark for a family attraction I know, but we will get to that specific goat later.

The station building features a big glass roof which not only floods the station with beautiful daylight, no, the second coaster Hals-Über-Kopf performs its first inversion, a Zero-G-Roll, over the station. This results in some spectacular views while waiting to enter the ride.

On start passengers get pulled backwards out of the station and up the lifthill, before a short hold* and being released back down and sent through the station with full speed.

After the first passage of the Station the train meanders its way along the inverted track of HüK. Always keeping low distance to the ground and ensuring a high pace to live up to its name.  Once Volldampf reached the Station building of Hals-über-Kopf it will enter the building and will ride up a spike just over the loading area of HüK.

After stalling over the station the train then rushes backwards through the layout one more time in a still rather high pace.

The train will then partially pass the station one more time before being slowed down by the lifthill and lowered gently back into the station.

As someone who rode quite a few shuttle coasters in the past and as one who has mixed feelings about backwards riding. I can ensure you this coaster rides like a charm, buttery smooth and with a pleasant pace that makes the ride very enjoyable for young and old. A perfect Family attraction with a hard warming story and beautifully themed roller coaster trains.

*I haven’t gotten a definitive answer if that hold on the lifthill is required to ensure the perfect timing on both roller coasters. But since we saw some pretty spectacular timed interactions between both coasters I am assuming this hold time on the lifthill is variable, to ensure an even more thrilling experience.

The train is themed after a steam locomotive with passenger trains amplifying the “schwäbische Eisenbahn” theme. As a beautiful bonus there is also the goat from the folks’ song standing on the last train and clinging onto the train. This little gesture pays tribute to the original story while presenting an alternative outcome to the songs’ lore in which the goat is well and alive at the end of the ride. This also makes the look and feel of the beautifully themed trains much more appreciable.

Hals-über-Kopf is Vekoma’s prototype of their new Suspended Thrill Coaster and is the second coaster to Tripsdrills new 2020 lineup.

“Hals-über-Kopf” can be translated from German as (Upside-down). As the name of the ride already implies this Vekoma Suspended Thrill Coaster features a total of four inversions.

For the ride vehicles Vekoma choose their new Suspended Thrill Coaster vehicles which only feature lap-bars without any vest or shoulder restraints, which offer a good fit and a sensational experience of freedom. Similar to Vekoma’s suspended family coaster the seats shock absorber allow the seats to sway from side to side ever so slightly. While it’s barely noticeable during the ride, this system not only reduces stress to the chassis it also helps for a very smooth ride experience.

Passengers get sent up the Lifthill where the coaster will be pulled up to a height of 30 meters. This allows the riders to get a glimpse of what’s about to come.
The first drop is just above Volldampf’s tracks. During the first drop the trains will swing to the right in an about 75° turn heading directly for the Family boomerangs station to then perform the first inversion, a left-rolling Zero-G-Roll over the station. Directly connected to the first inversion is the second one which is an Immelmann which bring passengers back on course.

This is followed by two short airtime hills while crossing Volldampf and its tracks. After a right turn the train will continue rolling through the third inversion, a right-rolling twisted airtime hill under it’s Lifthill. This third inversion gets followed by a right, downwards helix, followed by a Bunny Hop. For the last part of the track the coaster will then dive below ground level for a Canyon dive, before snapping into the fourth and last inversion a left-rolling Corkscrew before hitting the final brake run.

As a Big fan of Battle Star Galactic Cylon at USS I would have loved to see a looping going around the lift hill but regarding the only 30-meter height and pacing of the coaster I can understand that a loop simply wasn’t an option.

The ride vehicles are themed after the seven Swabians where the seat represents the Backpack of a Swabian and lets the rider become a Swabian which will rush to adventure. The long spear from the fairy tale can be found on the chassis of the first car. The chassis also feature wooden shields over the up-stop wheels of the cars.

As someone who casually jokes about Vekoma’s SLCs and their smoothness I am thrilled to see Vekoma once again back on top of the game. Not only was the new Suspended Thrill Coaster Prototype as smooth as a roller coaster in 2020 should be. Also the layout was pretty entertaining. The ride was action packed and I never had the feeling that an element was unnecessary drawn out or not fitting into the ride experience at all.

I guess it’s important to understand that Hals-über-Kopf still is a family-friendly attraction and not a extreme thrill scream-maschine. And for a family friendly suspended thrill coaster with inversions Vekoma in my opinion nailed it!

This makes me wonder what more extreme suspended thrill coaster models we might see in the future and based on my experience with Hals-über-Kopf I can’t wait to ride them.

When It comes to the area in which the rides have found their new home at Tripsdrill I can’t really say much yet because most of the theming is still missing. But what I can say is that everything we already saw and especially the trains theming  the new attraction will end up looking very lovely, I am sure! Based on how well all the other attractions are themed I can’t wait to revisit Tripsdrill next year to find out what the theming has done to both of the rides.